The table and article below show the lifetime odds of death from a variety of sources. Many Americans are terrified of terrorism.  But there many things that worry people much more than murder from terrorists. 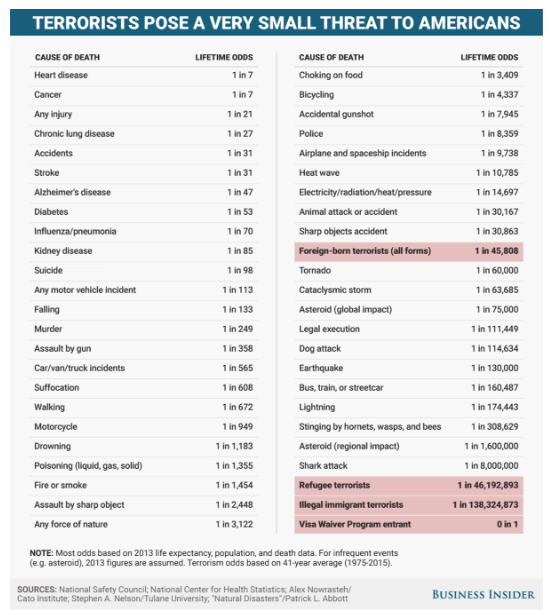 Click the link below to read the full article:
http://www.businessinsider.com/death-risk-statistics-terrorism-disease-accidents-2017-1

People are very frightened of terrorism, but as shown in the article below, terrorism does not kill very many Americans 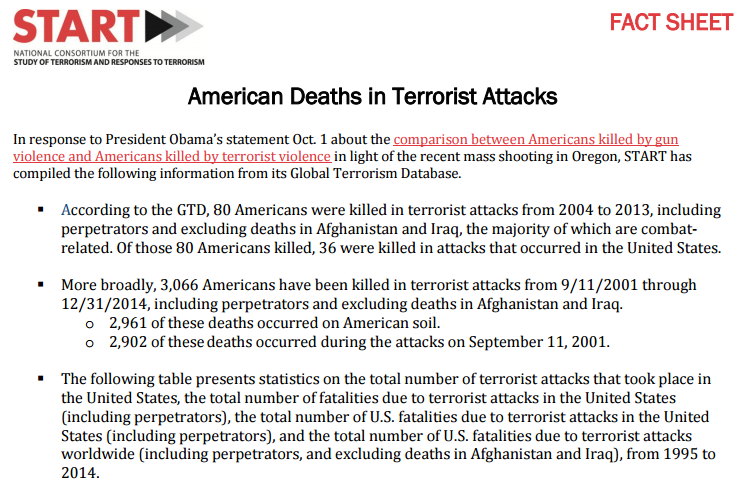 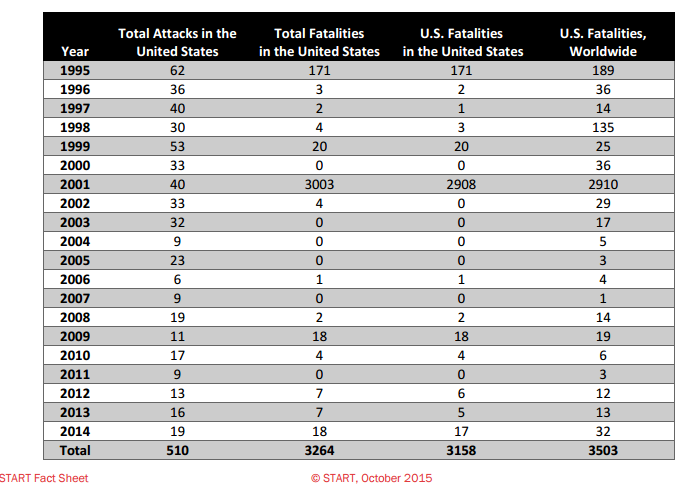 What Were You Doing 50 Years Ago?

What Were You Doing 50 Years Ago?

I was driving back to Chicago from Norfolk, VA, getting ready for Marine boot camp.

I graduated from High School in Jan 66. I sold my fine 1930 Model A Ford convertible with rumble seat to finance my next vehicle.

I worked for one year as a volunteer social worker inner city of Norfolk, VA. I used the money from the sale of the Model A to buy a Honda 50 motorbike, which I then traded for a 56 Mercury Station Wagon on its last legs.

I tried to give my old 56 Mercury to my coworkers Pam and Meryle. They did not want it so I drove it home. I did not think it would make it all the way to Chicago, so I thought that when it died, I would leave it by the road and hitchhike the rest of the way home.
The tolls required for the bridges leaving Norfolk to the north and west always annoyed me, so I traveled south initially to avoid the tolls for my last trip out of town. I took it easy to try to get the car to survive as long as possible. The heat was out, and this was in February, so it was pretty cold. I kept putting more clothes on. The first night I slept in the mountains in the back of the car. The next morning I washed up in a mountain stream waterfall in the snow - beautiful and invigorating.
On the second night I got caught in a snow storm near Louisville. The bald tires of the Mercury did not work well, and I ended up spending the night in a rest stop.
On the third day I got to Purdue University, where I thought I would visit a friend. I knew three people at Purdue. I had no idea how big the campus was - I had thought I would just drive around and find them. And that is what happened. I saw Lynne Carlson, a girl I knew very slightly from high school. She was a nice person,  very smart, and a cheerleader. I asked her if she knew where Bob Stevenson was. She did, and she jumped in the car to take me there.
I had not shaved or bathed properly for three days, I had three sets of clothes on, with each pair of trousers shorter than the one underneath. I had been smoking cigars, and the old car reeked. She was horrified that she had gotten into the car, but gamely took me to Stevenson’s fraternity. I offered her a ride home, but for some reason she preferred to walk.
I visited with Stevenson for a time, then continued on my way. The car was throwing oil rapidly now and I needed to put in two or three quarts every 50 miles. I spent my last dollar on several quarts of old reprocessed oil, and a gallon of gas, and limped into Chicago with both tanks dry.
I tried to sell the old car, but found few takers. I was going to junk it, but a local dealer bought it from me for $20.00.
More about the Model A at:
modelahullinger.blogspot.com

More about my time in Norfolk, VA
popv.blogspot.com

More about my time in the Marines.
hullingermarine.blogspot.com

www.pbs.org/your-inner-fish/watch/
View full episodes and videos of Neil Shubin on a quest to uncover the origins ... Episode 1: Your Inner Fish – Preview. Episode 2: Your Inner Reptile

▶ 54:43
https://www.youtube.com/watch?v=txtOIV_EEks
Jan 11, 2015 - Uploaded by Bluectist
The documentary explains how humans evolved from early primates, our relationship with apes and most of ...

▶ 16:14
https://www.youtube.com/watch?v=UPggkvB9_dc
Nov 5, 2014 - Uploaded by CrashCourse
In which John Green and Hank Green teach you about howhuman primates moved out of Africa and turned ...

▶ 1:28:31
https://www.youtube.com/watch?v=y9Ski3H8dXk
Oct 28, 2015 - Uploaded by Documentary Channel World
Human ( Homo Sapiens Versus Neaderthals) evolution is the evolutionary process leading to the ...

How Lucy Changed the Way We Understand Human Evolution | Time ...

▶
time.com/4126011/lucy-australopithecus-discovery/
Nov 24, 2015
The Australopithecus has been around for a while now—and so has our knowledge of that human ancestor ...

▶ 5:10
https://answersingenesis.org/human-evolution/
Are humans simply the by-product of evolution from an ape-like ancestor or were they lovingly fashioned by ...

▶ 15:42
https://www.youtube.com/watch?v=6PZYYIaB0UY
Oct 3, 2014 - Uploaded by Big History Project
No, we really really did not evolve from monkeys. John and Hank Green explain this and lots of other things ...

▶ 3:25
https://www.youtube.com/watch?v=zohMSNpW91k
Mar 24, 2008 - Uploaded by CeeSee7
OK so I'm a HUGE biology and anthropology geek and student and I decided to do a little slide show that ran ...
Stay up to date on results for human evolution.
http://www.pbs.org/show/your-inner-fish/